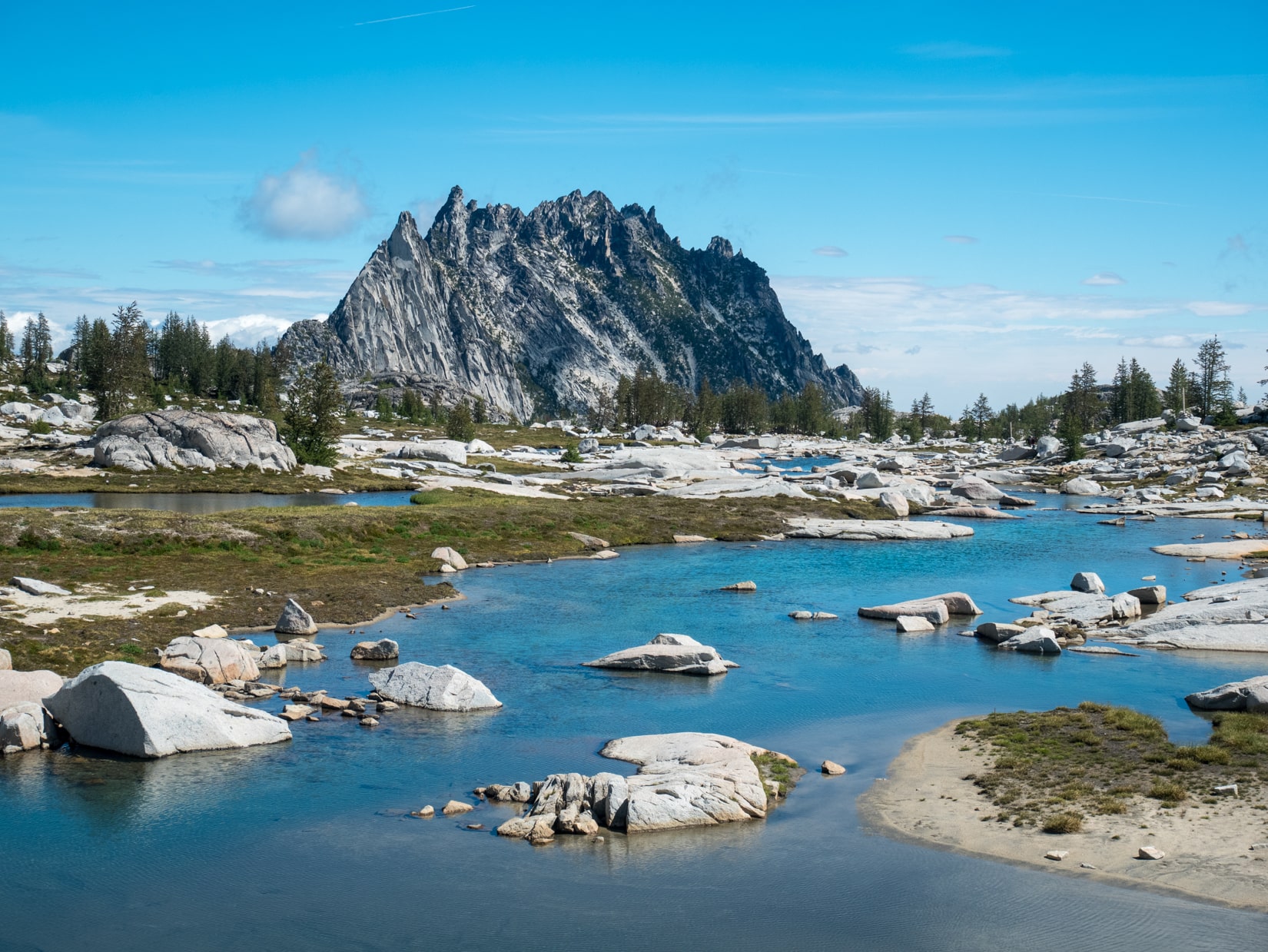 One of the most popular hikes in Washington State, and often features in lists of hardest day hikes in America. The Enchantments Traverse is not close to being a walk in the park.

The Enchantments can be thought of as a hike in three parts.

I hiked this in a day with a friend in August, and finished the knee scorching 20 miles traverse in one day. Here’s my report!

A few days before the hike, after checking for favorable weather, we booked a shuttle with Leavenworth Shuttle for $30/pp. The Loop Connector is also a popular choice for the shuttle, but it was sold out for the day we wanted. We booked a 5:15am pickup so that we can start the hike from the Stuart Trailhead before 6am.

We showed up at the Snow Lakes trailhead the night before the hike and slept in the car. We thought that we would be the only ones, but in fact, the parking lot was pretty full when we arrived and we were far from the only ones doing this.

After getting up at 5am, we got ready and got on the shuttle taxi.

At the Stuart trailhead, we noticed that this trail was pretty packed! We got our free day-use permit at the trailhead and stepped on the trail. There were hundreds of hikers starting the thru hike at the same time as us, so the trail was almost a conga line for the first mile or so. It’s still nighttime, so headlamps were a must.

Not much happened on the trail until Colchuck Lake, it was a steady climb up 2000ft and we took turns leapfrogging other groups. We made a few breaks to look at the sunrise, and stopped to help an injured hiker.

Colchuck Lake was a nice stop, and a great place for photos. We ate a snack there and continued on the back side of the lake in order to climb Asgard Pass.

From this onwards the trail’s more or less just scrambling on rocks. To get to the other side of Colchuck, you need to navigate a large boulder field, and then follow Asgard all the way up on loose rocks. You’ll definitely need to use your hands at this climb that takes you up almost 2000ft in half a mile, and try to climb up from the left side of the rocks, as the right side is closer to rockfalls and snow bridges. We were fortunate that we climbed Asgard Pass in the shade on a cold day, I can imagine how much worse it can be if it’s warm out.

Lots of good views looking back at Colchuck.

Once we made it up the Pass, we were greeted with an alpine lake with a backdrop that reminded us of Patagonia.

The views just gets better and better from there, with a new lake at amost every twist and turn on the trail. The trail is pretty flat at this part, so it’s a pleasure to hike.

We decided to hike up to Prusik Pass, which meant another 400ft of climbing after Lake Perfection.

It wasn’t too bad and we got to see a few marmots, then instead of going down Prusik the way we came from, we decided to turn this into a loop, and followed cairns towards Prusik Peak, then climbing down on granite to the main Enchantments trail.

Prisik Pass is a worthwhile side hike if you get the time… Great view on top and you get a chance to stumble upon Gnome Tarn which is a nice little pond with very little visitor traffic.

The lakes were great, I especially liked Crystal Lake and Perfection Lake! We also saw a fair number of goats, marmots, and even a pika.

Now, after Lake Vivianne, we had to deal with a grueling 8 miles hike out. This section starts off pretty tough, with steep. At times we have to use our hands, and be mindful of good footing as we were starting to feel a little tired at this point.

There isn’t much to say here, except this section took forever, and the lakes we passed by, like Snow Lakes and Nada Lake, didn’t really compare to the views we just had.

We eventually made it to the trailhead right after sunset, around 9PM, and drove to Leavenworth for a well-deserved hot meal.